As I explained in December I am researching for my spring and autumn tours at the same time, themed “Giants” and “Revenge” respectively. All very straight forward… until you come across a story that sits in the part of the Venn diagram where the two circles overlap and could be used in either set. The most surprising of these is probably the most well known story of the big people going.

This tale is turned in to pantomimes on a regular basis and is a staple of children’s literature. As with any well known trope from olden times it has started coming under fire from modern ethical watchdogs. It’s easy to see why too. The problem being that the protagonist, one “Jack”, who is established early on as somewhat easily led, can appear as rather racist. After a giantess lets him in to her husband’s castle and feeds him, the ungrateful simpleton repays this kindness by stealing from the giants not once, but three times! Whilst trying to escape justice after his third larceny he brings about the death of his understandably enraged victim. It is presented as un-premeditated but I think it would still attract a charge of murder if it came to court. One would hope that even UKIP supporters would see that this is a bad way to treat people from other lands who are a bit different from us and most definitely not the model for a foreign policy.

So where, I hear you ask, does the overlap with the revenge theme come in? Well, in my usual fashion I have been hunting through my library, comparing different versions and digging out the earliest manuscripts. In the case of Jack And The Beanstalk (which in case you hadn’t realised is the story in question) this takes us back to 1807. At this time the story contained an encounter with a fairy when Jack reaches the top of the beanstalk. This fairy tells a chilling story of Jack’s kind and generous father who was tricked, robbed and murdered. The perpetrator of the deed, whilst burning down their manor, spared the infant Jack and his mother on the condition that she never tell Jack about his father. The wicked murderer come arsonist is, of course, the giant and the fairy points out quite distinctly that the giant’s wealth was taken from Jack’s father and is rightfully his.

This episode, which is conspicuous by its absence from the majority of later re-tellings of the tale, casts Jack’s behaviour in a very different light. No longer a wayward, sizeist, thug, Jack is the true avenger, reclaiming his ancestral rights and handing out the ultimate punishment to the original villain of the piece. The worrying bit is not just that the story has been reproduced so often without this justification for Jack’s criminal spree, but that doing so has done nothing to harm it’s popularity, many of us falling into despising the giant based on heresay and rooting for his downfall with no hard evidence that he has done wrong to anyone.

Fascinatingly the fairy also admits that she was influencing Jack when he exchanged his cow for a handful of beans, which explains how he goes from being laughably gullible at the beginning of the yarn to a cool master of negotiation, concealment and escape by his first encounter with the giants.

So, it always pays to do your research, even when you think you know the story, possibly especially then… and I had better get back to mine, there are giants and avengers to sort out and they keep getting mixed up!

…here’s to living happily ever after, until the next adventure.

Back To The Beginning Again

Along with many other storytellers I am particularly drawn to mythologies, the sets of stories featuring the deities that shaped the world. The similarities and differences between our most fundamental perceptions of the universe we live in are fascinating.

Africa is a big continent. It’s bigger than Europe, India the United States and China put together. Across this vast area of deserts, mountains, jungles, plains, deltas and downlands (any of which make England look like Rutland), a great variety of peoples and cultures have developed, dwindled, fought, traded and flourished. Earlier this year I was given “A treasury of African Folklore” by Harold Courtlander, despite being over 600 pages and the size of a brick this tome barely offers a peek through a gap in the door to the treasure house of tales that the various African nations tell, but what a peek it is! Although only on page 193 I am already onto my third creation. This one comes from the Yoruba people of Western Nigeria.

A long time ago earth did not exist. There was sky above and water below. Oloron was the chief “orisha” (spirit, or god. As with the Japanese “Kami” it would appear to be a word that covers both without directly translating as either). Other orisha included Oloron’s children, Eshu, the god of unpredictability; Orunmila, the spirit of divination and the unrelated Obatala, King of the White Cloth (The Yoruban pantheon is conspicuously male, in stark contrast to their neighbours, the Fon people, who’s deities are predominantly couples and androgynes). All these orisha lived in the sky and paid no attention to the only female orisha, Olokun, who ruled over the waters and marshes below… until Obatala looked down and decided it would be a good idea to make some land for things to live on. 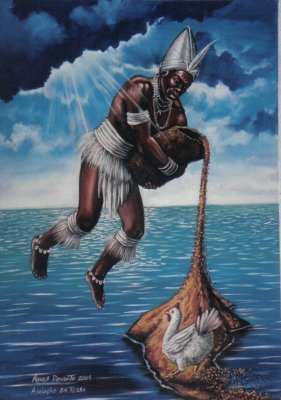 First he checked with Oloron who agreed it was a fine plan (notably, nobody bothers to consult Olokun which leads to trouble further down the line), then he called on Orunmila who divined what he would need. After a long process of gathering all the gold in heaven from a variety of unspecified orishas the goldsmith eventually makes a chain and Obatala climbs down, pours a snail shell full of sand into the sea, drops a hen on it who spreads it around in an uneven fashion thus creating hills and the like, plants a palm nut and settles down with a black cat. It’s all a bit dark so Obatala requests some light and Oloron, the sky god, makes the sun.

Eventually Obatala starts to feel lonely and begins to make people out of clay. The work is tiring and Obatala decides to take a break for some refreshment. He taps the palm trees for their sap, ferments it and quenches his thirst. Now that the world is a little softer Obatala returns to his labour but with drunken fingers he makes a number of misshapen figures, some with short arms, some with too few fingers, some bent or humped and because of his befuddled state he does not notice his mistakes. When they are all done he calls upon Oloron again to breathe life in to them and so the human race came to be. When Obatala sobered up and saw his handiwork he was filled with sorrow. He promised never to touch palm wine again and to take especial care of all those who are lame, formed imperfectly, blind or with no pigment in their skin.

It fascinates me how each different culture finds some specific question to answer, like why men and women are different or why death is irreversible, frequently leaving the generation of essential features like the sun with a brief, almost casual, passing reference. I am also struck repeatedly by the acceptance of imperfect gods and how their imperfections explain the world we experience, often far better than if they were all powerful and all knowing.

…here’s to living happily ever after, until the next adventure.